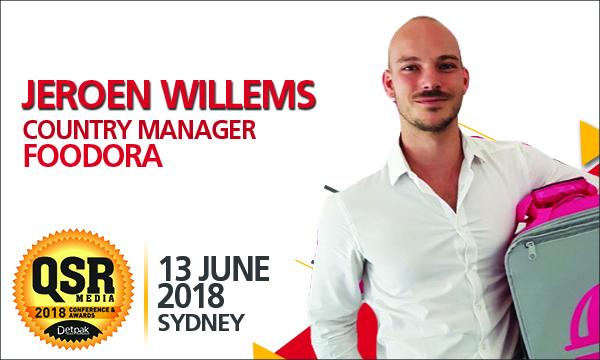 Jeroen Willems says he's seeing dark kitchens pop up all over the world.

"We're also seeing more and more restaurants push the envelope - experimenting with different cuisines and traditions. The sushi-burrito for example, who'd have thought? The other major trend is the delivery phenomenon itself. Delivery is well and truly a part of our lives now."

He added that foodora's focus this 2018 will centre on the improvement of its tech and integration with partners.

"We'll be using our pick-up technology more diversely as well - which will give flexibility to partners who would like to use our platform on some level while simultaneously keeping the delivery component in-house," Willems continued.

You can hear Jeroen speak about the role of aggregators in the Australian restaurant marketplace at the QSR Media Detpak Conference and Awards to be held in Sydney on June 13, 2018.

With a background in business, communication and psychology, Jeroen began his career in the Netherlands before crossing the globe to Australia. Jeroen joined the foodora team in 2015 as a Business Development Manager and has risen swiftly to become foodora Australia's Country Manager in 2018.

Aside from his talk on the role of aggregators in the space, Willems' discussion will endeavor to cover foodora's role in connecting restaurants, contractors and customers and the opportunities, flexibility, and insights foodora can bring to partners.