CKE Restaurants General Manager for Asia Pacific Gaven Needham details their approach to growth in an interview with QSR Media.

Adjustments are part and parcel when joining a new company or landing a new role. But for Gaven Needham’s case, one can argue that it may even be an understatement.

The former Head of QSR for Caltex stepped into his General Manager Asia-Pacific position at CKE Restaurants, the operator of Carl’s Jr. in Australia, just two days after the first pandemic-induced lockdowns were implemented in late March.

Initial challenges were clear, as he had to meet his team, suppliers and franchisees without the usually beneficial interpersonal communication.

Implementing strategy also needed to be fluid considering different state requirements and various forms of restrictions in the region.

“You couldn't strategise more than a week in advance,” he said. “It's been challenging, but it's probably given everyone in the industry an ability to sort of step back and go, ‘What's really important to our customers, team members and business right now?’”

And for Carl’s Jr. - it’s about growth and positioning itself to be a third pillar in Australia’s competitive burger scene, with Needham disclosing plans to establish 100 stores within five years. In past years, the American burger chain previously said it wants to have 300 stores.

Currently, the chain stands at 21 restaurants and hopes to close the year with 24, including opening its first store in Sydney in early 2021.

“CKE has around 4,000 restaurants globally. However, in Australia we’re effectively a start-up so it gives us the ability to be nimble (and) reactive while having that big support machine behind you in the U.S.,” he said.

“We intend to bring this brand to 40, 60 and ultimately, 100 stores in Australia in pretty quick succession...Burgers are the biggest QSR category; McDonald's and Hungry Jack's have had it to themselves for a long time...so it's a good opportunity to be a meaningful third player with a superior product and experience for our customers.”

Needham acknowledged the gap in brand awareness compared to the two fast food heavyweights, but said he sees this as an opportunity to introduce the chain’s premium burgers and value bundles to a younger demographic - primarily through social media.

“There's a whole new demographic of consumers coming through that don't necessarily watch anything on a traditional TV format; either it's YouTube, it's Snapchat, Instagram, all those sorts of things,” he said, noting that collaborations with e-sports organisations via Twitch are also a possibility.

“We're looking at ensuring we’re smart with our marketing spend and communicating who we are and fishing where the fish are. We do a lot of geo-targeting of consumers with messages that we believe resonate with them,” he added. “Every QSR brand wants to be on television. But, five years from now, I'm not sure TV will play the same role as it does right now.” 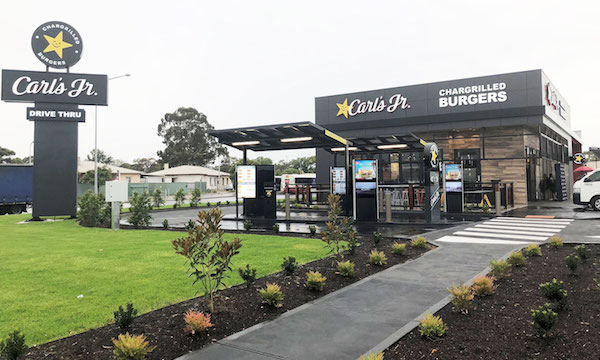 One of Carl's Jr.'s drive-thru store in Adelaide. Needham revealed drive-thru sales make up half of all revenue. Photo: Supplied

Sharpened drive-thru service, smarter delivery
Carl’s Jr. also had an early advantage amidst the industry’s general shift to off-premise channels, with 90% of its restaurants having drive-thrus.

Generally, Needham says drive-thru sales make up half of all revenue, whilst counter service (Dine-in and Takeaway) and delivery are at 38% and 12%, respectively.

“Drive-thru grew significantly from about half of our business to, in some restaurants, nearly all of our business. So [the pandemic] really sharpened us up on drive-thru speed of service and accuracy,” he said.

Whilst not in their immediate purview, Needham’s not closing his door on drive-thru only formats.

“I would never say no. In terms of the immediate pipeline of sites, we don't have that right now. However, if we were to come across an opportunity where we could get a small footprint that was drive-thru enabled, we would look at that. Never say never.”

To get a boost on the delivery front, Needham said every franchisee is now connected to at least one platform, which he also expects to allow them to be more visible and accessible in their respective trade zones. The larger plan, he said, is for restaurants to be available in the top two platforms in their specific trade zones “where it makes sense.”

Consumers, he explained, are also seeking out more “self-managed” experiences.

“Delivery and mobile ordering has become a necessity, not necessarily a ‘nice to have’,” he said. “As a whole, the industry - through necessity - had to work very closely with the aggregators out there to ensure they can maintain delivery service times, accuracy, safe and hot products and things like that. It made everyone get a little bit smarter about delivery operations integration as well.”

Other types of assets, depending on the need and available real estate, are also being considered. Dark or cloud kitchens, delivery or off-premise only locations, are also being explored in other Carls Jr. markets globally.

“They're still in the concept stage, but again, it was probably one of those things that we thought, ‘Okay, maybe in the next two or three years, we'll look at that.’ Now, it’s like, ‘Okay, well, how do we do this quickly?’”

“Because, in some international markets, adding delivery makes the volume of the store just too hard to manage. So they need to take some of the pressure off operations by having a separate delivery operation,” he explained.

Regardless of format, Needham affirmed the chain’s focus of serving up a great customer experience. “That will always be our priority,” he said. 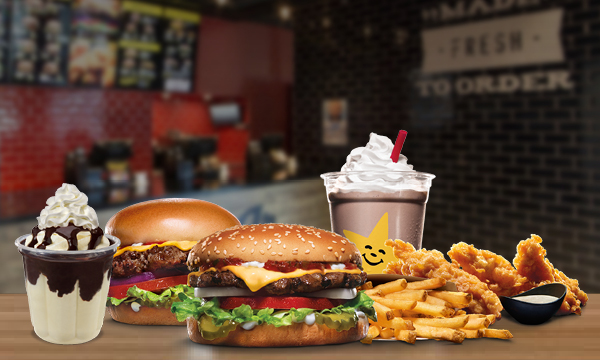 A selection of the Carl's Jr.'s range. The chain looks to reach out younger audiences via social media. Photo: Supplied

Continued focus on off-premise seen
Looking ahead, he expects a continued industry-wide focus on off-premise, with QSRs continuing to benefit from the impact of the pandemic on casual dining, pubs and clubs, as well as potential consolidation between third-party aggregators. Consumers may also pivot to more ordering ahead and click & collect to cut costs on delivery.

“Right now, there's a fair bit of money around in the economy with JobSeeker and JobKeeper and so forth – that’s going to come to an end at some point. How the consumer and QSRs respond is going to be pretty interesting.” ###